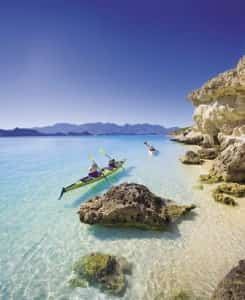 Although signs on the road in Mexico are often easy enough to understand, you may wonder about important terminology that you could encounter and need to know. Your Mexico insurance policy for federal highways, for example, may be referred to as seguros automóvil. Fortunately, you don’t need an interpreter to buy your Mexican auto insurance coverage online.

Instead of speed limits, you will observe signs indicating velocidad, which means velocity or speed. It’s helpful to take a little Spanish language from this term because words ending in -dad often mirror English words that end in -ity. Electricidad is electricity, ciudad is city, and comunidad is community. It is also helpful to remember that cognates can be your language buddies as you travel. A cognate is very similar in both Spanish and in English, providing you with good intuition about meanings. However, the idea can break down at times, especially if a male attempts to express embarrassment with the use of the word embarasado, which means pregnant. In border zones as well as Baja, you may find some Spanglish on building signs and used by people. Truck may become troque, and lunch may become lonche. These aren’t technically accurate as Spanish terms, but they are well-understood in some locations.

Topes are not at all familiar in terms of language similarities, but not being prepared could put a crimp in your travel plans. Topes are speed bumps, and they can be placed in inconvenient spots. Hitting a speed bump at a fast speed could affect your vehicle, so be prepared if you see this on a city street or highway.

Language Help with a Mexico Insurance Policy for Federal Highways

When you get your Mexican auto insurance coverage online, you also gain access to legal support for addressing the aftermath of accidents. Navigating Mexico’s legal system could be harrowing if you don’t speak much Spanish, but your Mexico insurance policy for federal highways includes bilingual legal help if you are involved in a wreck while driving in Mexico. You are also afforded bail bond coverage if your situation might otherwise keep you behind bars.