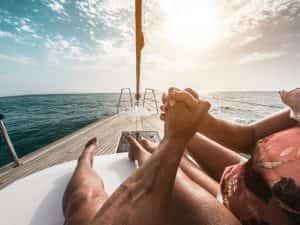 Senior couple having tender moments while traveling with sailboat in mexico.

If you visit Mexico, according to an increasing number of people who’ve done just that, you might actually like it so much you won’t want to leave.

According to reputable sources like the Kiplinger Letter, and International Living, which is a publication that has built an established business out of  keeping track of and investigating such developments, more Americans and Canadians have retired to Mexico than to any other country in the world.

Retirement in Mexico and other travel tips come with a reminder to buy Mexico car insurance by Mexican Insurance Store.com before your travels. Driving in Mexico isn’t a challenge, but fender benders without insurance sure are. Mexican Auto Insurance online provides the best rates and the best coverage, making sure your retirement dollars go farther.

About a million Americans, all told, are said to be headed South of the Border to live out their days in a  place that some describe as being like the United States used to be in the “good ol’ days,” that is to say, how things were about 50 years ago: offering a friendlier, safer, more affordable environment, with some distinct climate benefits, to boot, not to mention a whole slew of other factors to add to the appeal.

So, whether you’re  looking for a short escape or a longer-term or permanent haven, indicators point to Mexico as a destination of choice. If things are even a fraction as appealing as some of the descriptions from those who’ve ended up settling in Mexico, well – it wouldn’t hurt to see for yourself, now, would it?