Among the most prominent differences between traveling in Mexico and the USA and Canada are the military checkpoints set up throughout the country.

For a first time traveler, the sight of freshly graduated soldiers with military rifles can be quite unnerving.

Military Checkpoints have been built and manned as an effort to stem the tide of drugs free-flowing from Mexico to the United States. Like the TSA airport screeners, they serve mainly as window dressing. The big difference is that the Mexican Military won’t be putting their hands down your pants to feel you up.

First things, first. What are the Military Checkpoints looking for?  They are looking for drugs, illegal weapons, and federal criminals. Some checkpoints have drug-sniffing dogs; others don’t. In most cases, they merely ask only a few questions. Expect to hear, “A donde va?”, “De donde eres?”, and “Por que estas aqui?” These questions translate to, “Where are you going?”, “Where are you coming from?”, and “Why are you here?”

Before each day of travel, know the answers to these questions. Sometimes the accents of the soldiers are quite thick so that a hand gesture can help.

Point your thumb back behind you and tell them what city you left this morning. Then motion ahead to the city you plan to stop in tonight and say that city’s name. Lastly, say, “Turismo” as to your purpose.

Now, in most cases, they will probably say, “Pasale” and wave you through. If it’s an exceptionally desolate checkpoint, a dull day, you are driving an RV or luxury car, or are traveling with exceptionally lovely passengers, they may ask you to pull aside for a more thorough inspection, however they will rarely ask for your Mexican Insurance Store policy.

Do not be alarmed or worried by this. Despite whatever motivation, the soldiers are not there to ruin your day. Play along casually, and you’ll be on your way in no time.

A couple of things that will help speed your passage through the checkpoint is to be calm and respectful. Open up and show them whatever luggage they wish to inspect. Smile and nod in respect to them and the job they are doing. In most cases, nobody will speak English, but if you happen upon someone who does, be kind and even engage in some small talk.

If you have a cold drink in a cooler, offer one to them and their compatriots. It’s a great way to indicate that you are a good person and respect their roles.

Unless you are a complete jerk or like being arrested, don’t do any the following:

Doing any of these things will guarantee you an extra thorough search and possible detainment. They will probably also call ahead and make sure you are hassled again at the next checkpoint, too. 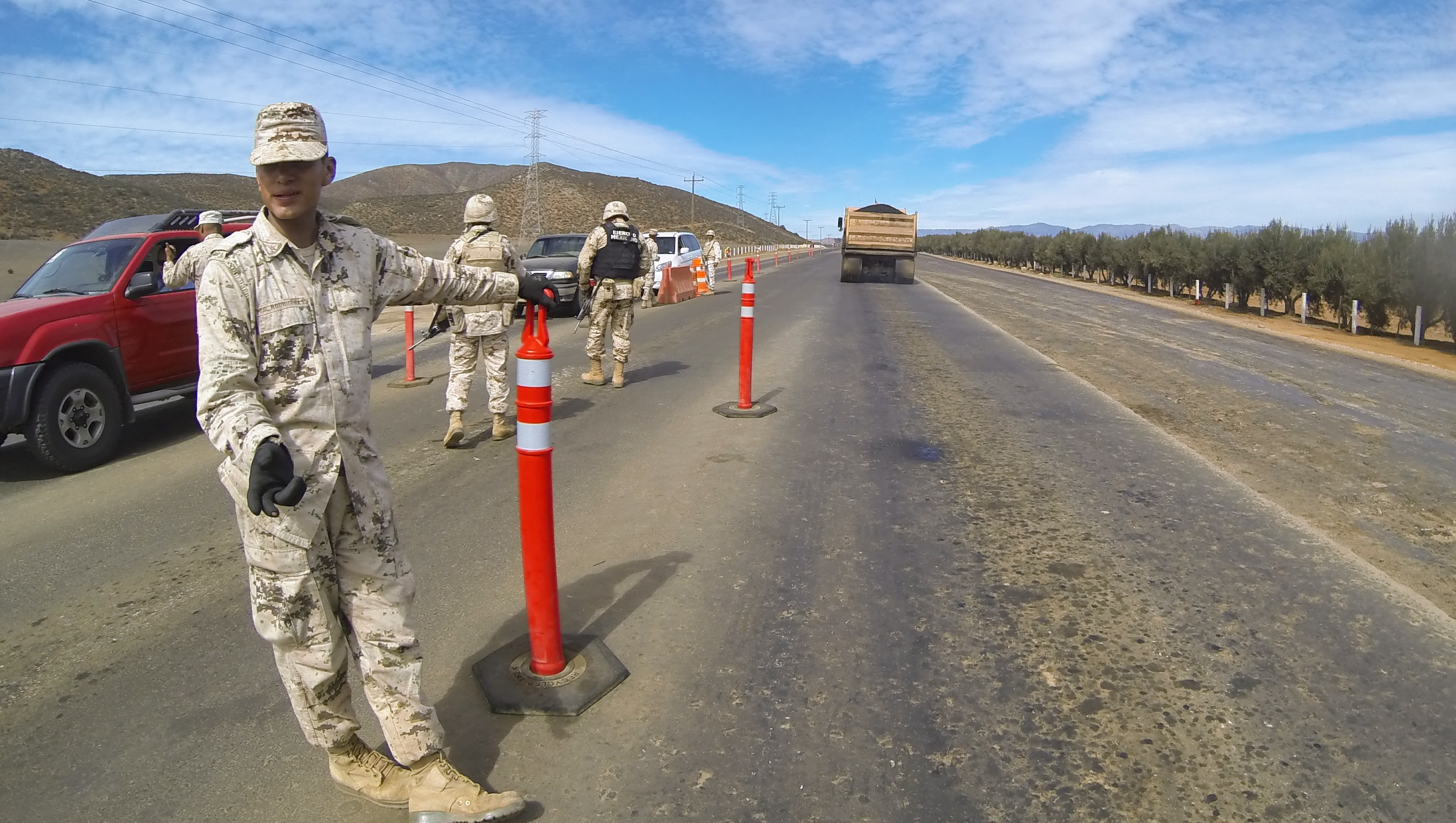 The Mexican soldiers are human, just like you. The universal rule is to treat others the way you wish to be treated.

During disasters like earthquakes, hurricanes, floods, and fires, it’s the military that does the bulk of the heavy work to restore life to normal.

Traveling in Mexico is easy. It’s especially true when you begin to understand the subtleties and differences from what you’re accustomed to back home. Military checkpoints are a part of life in Mexico and no big deal. After passing through a couple, it becomes quite simple and even fun conversing in a little Spanish.

To drive in Mexico, you must have a Passport and should have car insurance coverage. If you are planning to stay longer than a weekend or travel outside the Hassle-Free-Zones, stop and get your tourist visa and Temporary Vehicle Import Permit (TVIP). Then the whole of Mexico is yours to enjoy.