Explore the Cenotes of the Yucatan Cenote Ik Kil in the Yucatan of Mexico

If you’re looking to do something different in Mexico, why not do the Mexican version of spelunking and visit one of the cenotes, or underwater caves, of the Yucatan? Over 3,000 of these caves, with some estimates going as high as 30,000 small cenotes, but more than half of them have yet to be explored and cataloged thoroughly.

Don’t forget; you need a Mexican vehicle insurance policy before traveling to Mexico because US and Canadian car insurance is not valid in Mexico. A quality Mexican vehicle insurance policy is essential because the Mexican authorities will detain you until you pay for damages they say you cause to others. Mexican Auto Insurance is now required to drive on any highway in Mexico. Many US And Canadian visitors do not realize the need for Mexican Auto Insurance; however, US and Canadian car insurance policies are invalid in Mexico. Therefore, it would be best if you had Mexican Insurance to prevent you from being detained in case of an auto accident.

All cenotes aren’t necessarily underground. Some are visible, like sinkholes rather than caves, such as the Sacred Cenote at the pre-Columbian Maya archaeological site of Chichen Itza, in the northern Yucatán Peninsula. It looks like a mini-lake, only it’s almost perfectly round and sunk between rocks rather than land.

But if you can get to the underground caves through the Yucatan Peninsula, you’ll see history flashing before your eyes, along with breathtaking beauty and wonder. Most of these caves were formed when the water receded from the Peninsula, leaving behind caves formed by dissolving coral limestone, as the Peninsula used to be a reef. As a result, many of the caves are full of both stalactites and stalagmites, and of course, bats. In many shelters, water has come back into them, leaving something that’s almost otherworldly different from what’s traditionally seen in the United States.

Herein are the most popular of the Yucatan’s cenotes:

Dzibilchaltún, 15 km north of Mérida, has ancient petroglyphs, is located near the Temple of the Seven Dolls, and is often used as a swimming hole for locals.

Xlacah, explorers discovered more than 30,000 objects in 1958, many of them ritual objects associated with Mayan civilization.

Cuzamá, which has three cenotes, is located near the village of Cuzamá, one of which, the Chelentun Cenote, has clear, blue water, with excellent visibility and lots of Stalactite and stalagmite formations.

Tunkas have 97 cenotes, but none accessible to tourists, and are only open to spelunkers and speleologists. Cenotillo has the most cenotes, more than 150, of all types, with the main cenotes being Kaipech, Xayin, and Util.

The Sacred Cenote of Chichén Itzá, which we already mentioned, was once the site of human sacrifice. Human bones and jewelry of gold and jade have been recovered from its waters. Visitors are not allowed to swim or approach the waters here.

San Ignacio, more of a tourist attraction, as it’s been modified with lighting and music, along with many modern amenities.

Ik Kil, sometimes known as the “Secret Blue Cenote” because it has a 26 meters deep sinkhole with clear blue water, but also an area that allows swimming.

Zací, another famous cenote that encourages swimming in turquoise water, also has many stalactites and stalagmites and a rare species of eyeless black fish known as “lub.”

Dzitnup is an underground cenote with an opening at the top that allows sunlight in and illuminates the entire cenote.

Kankirixche, another cenote that encourages swimming, snorkeling, and scuba, with clear crystal water.

Many other locations have cenotes in Mexico also, so if you’re into caving in any form, Mexico has a lot to offer. 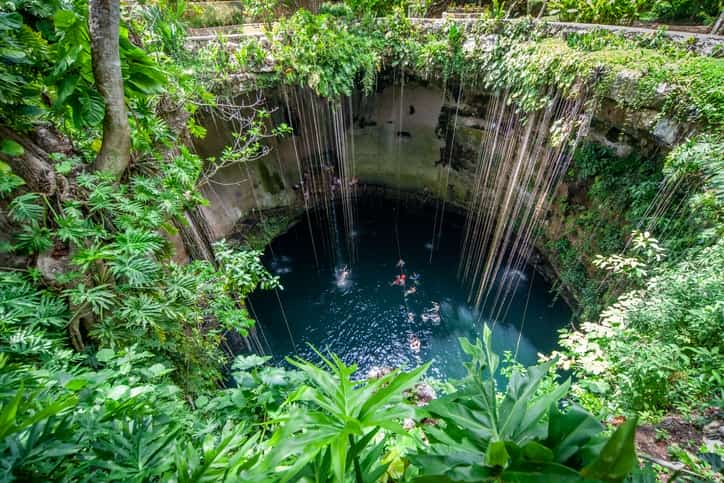