Float Along in the Trajineros of Xochimilco in Mexico City! 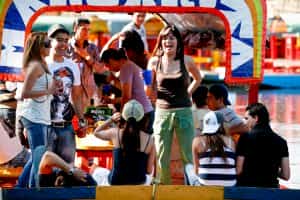 When most people think of Mexico City, images of a bustling, over crowded, smog swathed metropolis often come to mind. Theres no denying the fact that the city is crowded and polluted. However, it is also filled with many unbeatable historical and cultural attractions. Moreover, the city is bursting at its seams with surprising pockets of incredible beauty. By dismissing the city as a whole, youll miss out on its many charms and positive aspects.

Prepare for Your Excursion with Mexican Auto Insurance

From the U.S. border, the drive to Mexico City is a long one. Make sure that you have Mexican insurance by Mexican Insurance Store in place before you cross the border. Waiting until the last second to buy Mexican car insurance is never a good idea. By purchasing your Mexico auto insurance policy in advance, you can ensure that you get great coverage. Mexican car insurance is more than just a slip of paper , its an important way to keep yourself safe while in Mexico. Always secure Mexican insurance before making any foray into Mexico.

Explore the Remnants of an Ancient Lake

For instance, did you realize that Mexico City boasts a delegacion, or borough, thats criss crossed with canals filled with brightly colored boats? The boats are called trajineros and the delegacion is known as Xochimilco. If youd like to see a surprising side of Mexico City, make sure to put this unique area at the top of your list. The canals of the Xochimilco delegacion are all that remains of Lake Xochimilco, which was a prominent part of the great Aztec city of Tenochtitlan. Its mesmerizing to think that the canals on which you float were once a part of such an historic place. Xochimilco has managed to retain its unique ambiance; although it is technically a part of Mexico City, it has resisted complete amalgamation. When you visit, you will be swept away by the brightly colored buildings and trajineros. Whether you get on a canal or not, youll love the eclectic nature of this unique place.

Visit the Island of Dolls

One of the most unusual tourist attractions in Xochimilco has to be the Isla de las Munecas, or the Island of Dolls. If you can set aside about four hours for the round trip journey, youre sure to be blown away, and even a little freaked out by the island. It is populated with thousands of dolls, which its former resident placed there in honor of a little girl who drowned nearby. To add a little flair to the excursion, rent a boat with musicians and food and make a day of it, you wont soon forget it! Float along in the trajineros of Xochimilco in Mexico City! If you want to gain more knowledge on Xochimilco, just visit this URL.