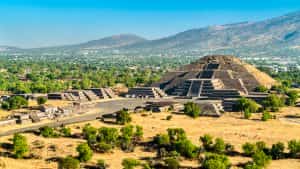 View of the Pyramid of the Moon at Teotihuacan. UNESCO world heritage in Mexico

Mexico is known for its ancient attractions. Populated more than 20,000 years ago, Mexico’s history runs deep and wide. From its original indigenous inhabitants to Mexican Independence, the ancient attractions of Mexico span the entire country. To the benefit of travelers today, reminants of Mexico’s history can be found in various forms. From small relics to enormous buildings, visiting Mexico in search of these golden treasures is as awarding as it is adventurous.

Here are two of the most popular along with a few details about each one.  To truly grasp the grandeur of any one of these sites, you will just have to visit them.

This is perhaps the most important ancient site of all the ones in Mexico.  It is the one that the most tourists turn to when visiting Mexico because of its impressive stature and its clear connection to the ancient Mayan civilization.  This site is so impressive that is has been recognized for two outstanding honors.  In 1988 it was granted World Heritage Site status by UNESCO World Heritage Site and was even chosen as one of the new Seven Wonders of the World.  It does not get more impressive that that.

This Aztec site is known as the City of the Gods.  In Teotihuacan you will find yourself face to face with some of the biggest pyramids in the world.  Standing before these monstrous structures forged by ancient civilizations, you too will wonder how they accomplished such feats.  And you will come to understand why this place is known in legend as being the location where the gods came together to set in motion the creation of man.

Other locations in Mexico will be visited in the upcoming weeks to show just how rewarding a trip South of the Border can be.